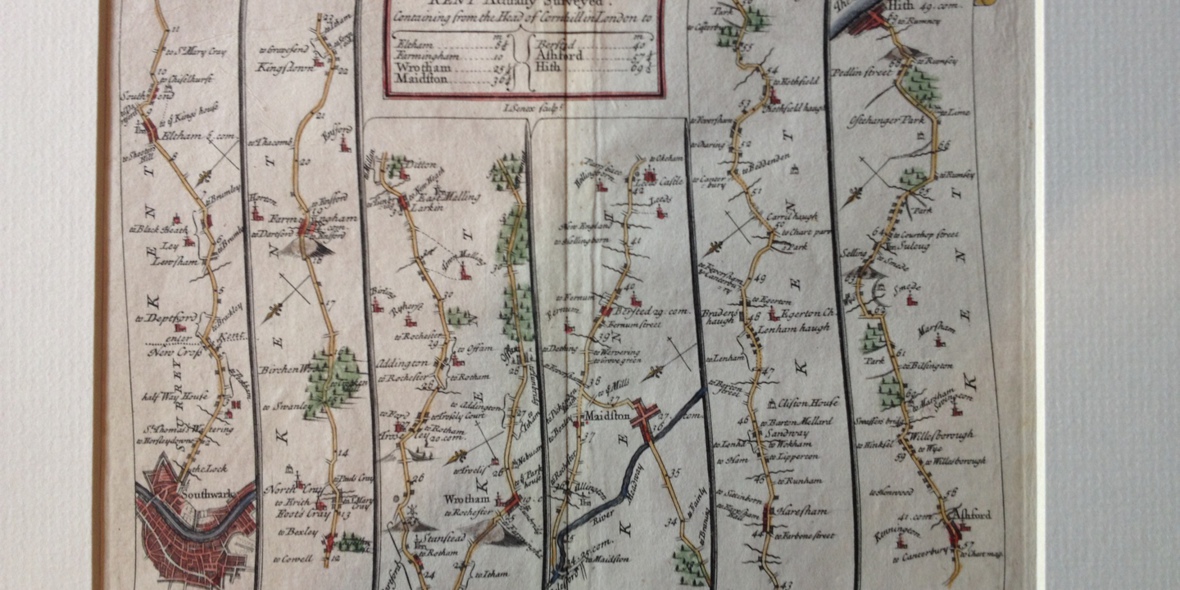 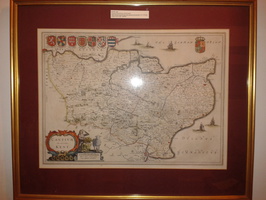 An attractive map of Kent by the famous Dutch cartographer Blaeu (23 September 1596 – 28 May 1673). This English county map is highly decorative with figurative cartouches and heraldic family coats of arms as well as ships on the sea. The map is very detailed and gives many place names, smaller villages or settlements. Rivers, lakes, mountains and woods are also indicated. Jan Blaeu (1596-1673) was a son of a famous Dutch cartographer, Willem Janzoon Blaeu, and he shared his father’s passion and continued his work

SPEED, John Kent, with her Cities and Earles described and observed. C 1670

John Speed (1552-1629) is arguably the most famous English cartographer of any period, as a result of his atlas The Theatre of the Empire of Great Britaine. The individual maps are the best known and among the most sought-after of all county maps. The maps were used by both sides in the English Civil war. 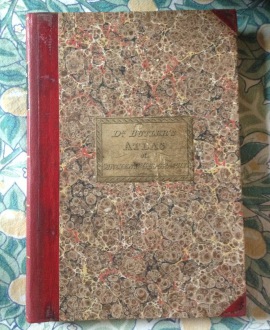 Paterson's Roads; being an entirely original and accuate description of the all the direct and principal cross roads in England and Wales, 1826 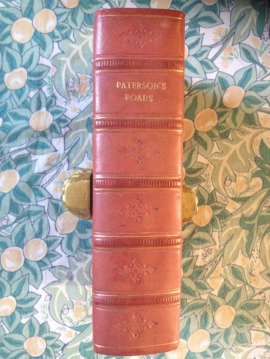 Paterson's Roads; being an entirely original and accurate description of all the direct and principal cross roads in England and Wales

The eighteenth edition by Edward Mogg. published in London 1826.

Includes several uncoloured engraved maps (such as London to Holyhead, the Isle of Thanet and adjacent country, the route from Deal to Hythe and route from Hythe to Rye) but missing engraved frontispiece.

Includes an extensive index to the country seats and a table of populations of the principal towns, parishes and places in England and Wales. This table also includes rates of postage and times of the arrival and departure of the mail, corrected to August 1826.

Rebound in full red leather with gilt title on spine and advertisments inserted at the front. Red speckled effect on page edges. 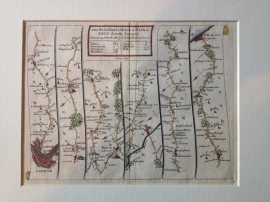 Hand coloured copper plate engraving by John Senex (1690-1740) showing "The road from London to Hith in Kent, Actually Surveyed". The map dates from around 1719.

This road map is sold mounted. 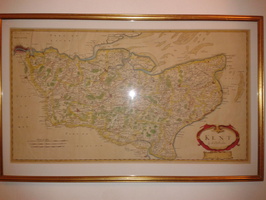 Robert Morden (c.1650-1703) was an English bookseller, publisher, and maker of maps and globes. He was among the first successful commercial map makers. Between about 1675 and his death in 1703, he was based under the sign of the Atlas at premises in Cornhill and New Cheapside, London. His cartographical output was large and varied. His best known maps are those of South Wales, North Wales and the English Counties first published in a new edition of Camden's "Britannia" in 1695. 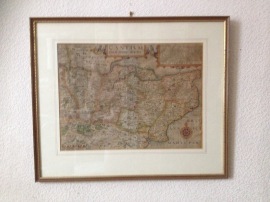 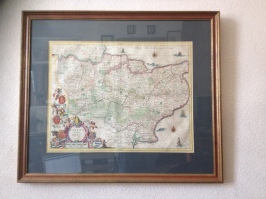 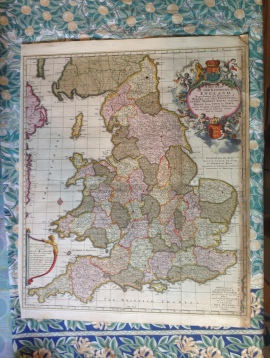 Visscher and Overton engraved map of England and Wales

Fine hand coloured copper plate engraving published in 1695. The title has an extremely decorative title cartouche and some of the hand colouring (in particular the green) is original and would have been added before the map was bound at the end of the 17th century.

The far right hand side (which is where the map would have been bound in to the atlas) is discoloured and has been professionally restored.

The separate accompanying engraved table (which is the same height as the map and would have accompanied the map in the atlas) includes information (such as the market days) of the principal towns and cities identified on the map. 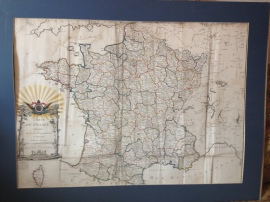 Some professional restoration has been undertaken especially at top edge and folds. The map would have originally been been bound.

Includes Revolutionary tricoleur as part of the title cartouche