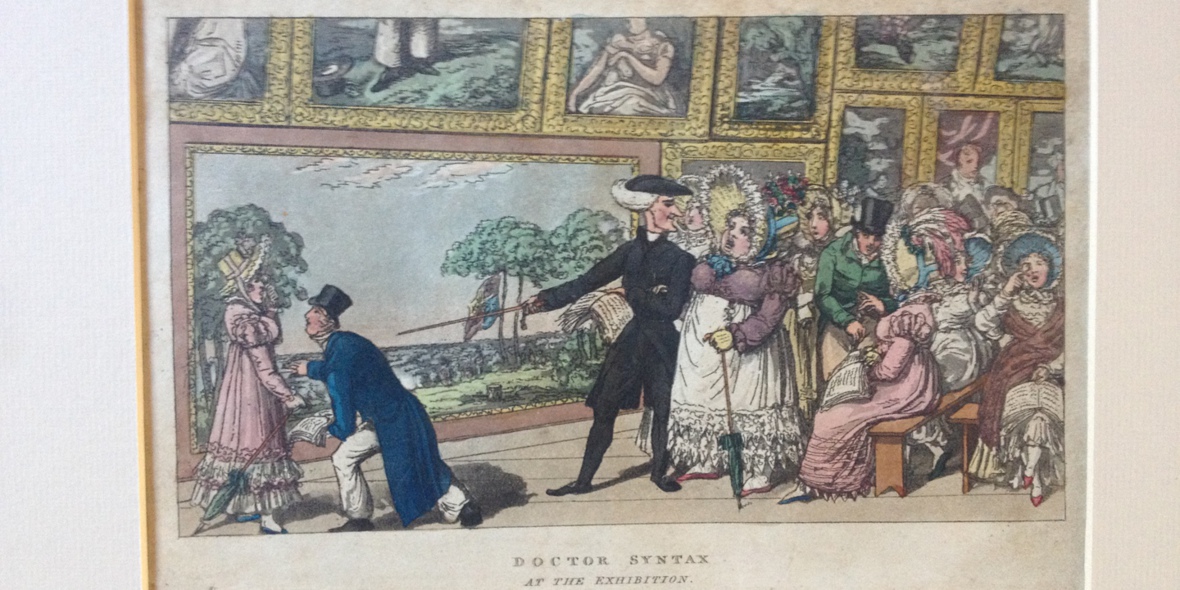 Teignmouth Bridge, from the Quay.This Bridge was Designed by and Executed under the direction of Roger Hopkins, Civil Engineer, &c.&c.&c. Published 1827. 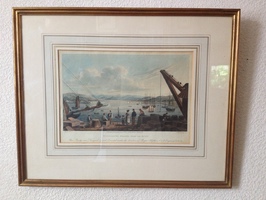 Drawn by Strutt and engraved by C. Rosenberg
Published by E. Croydon, June 5th. 1827, Public Library, Teignmouth.
Hand coloured aquatint, 265 x 360mm. 10½ x 14¼". Slight central crease.
Scarce locally-published print of the first Shaldon Bridge, which crossed the estuary mouth of the River Teign at Teignmouth, Devon. Figures and cargo on quayside in foreground. The original bridge was owned by the Teignmouth and Shaldon Bridge Company and opened on 8 June 1827. It had 34 wooden arches and was 1,671 feet long, which made it the longest wooden bridge in England when built. It had abutment walls of a considerable length at either end, and a swing bridge at the Teignmouth end to allow sailing ships to pass up the estuary. It cost around £19,000 to build, but the overall expenditure was about £26,000 due to the costs of the necessary Act of Parliament and the purchase of the old ferry-rights. Toll houses were built at each end of the bridge, and the one on the Teignmouth side still survives. After only eleven years, on 27 June 1838 the centre arches of the bridge collapsed, the timbers being eaten through by shipworms. It was rebuilt in wood and reopened in 1840, but it partially collapsed again in 1893. The bridge was completely rebuilt between 1927 and 1931, using steel for the piers and main girders and concrete for most of the deck.

Published in Amsinck's famous work on Tunbridge Wells in 1809 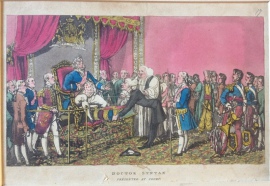 Dr Syntax was a comic character created by William Combe and the cartoonist Thomas Rowlandson.

Doctor Syntax at the Exhibition 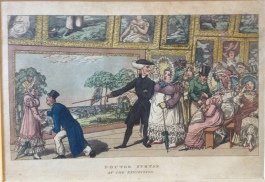 The River Medway and Bridge at Tonbridge, Published by G Wise Circa 1810 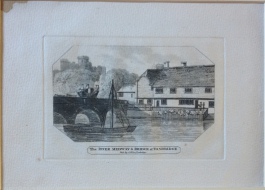 Original antique engraving published by G wise in Tonbridge Circa 1810 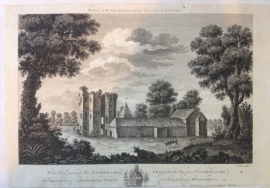 Ruins of Archiepiscopal Palce at Otford 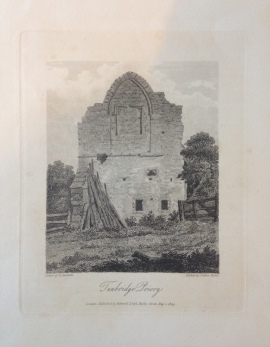 Tunbridge Prriory drawn by Amsinck and engraved by Letitia Byrne 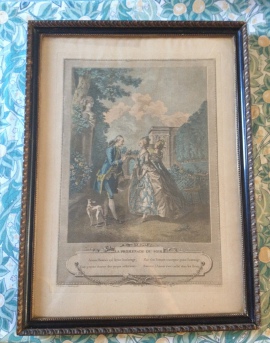 Back of the frame requires tidying up

Leaf from Devotional Circa 1500 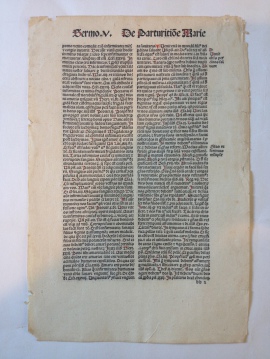 Leaf from Devotional Circa 1500

Text on back of leaf 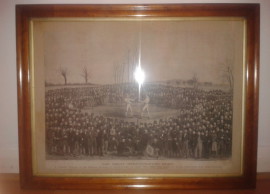 A Faithful Picture of the Historic Contest at Farnborough on April 17th, 1860, with Portraits of the Celebrities who were present

Printed in America and now laid down on board

On April 18, 1860, the British heavyweight boxing champion, Tom Sayers, met T. J. Heenan of the USA in what was to be the first world heavyweight contest, and the last of the brutal bare-knuckle bouts under the rules of the Prize Ring.

The Times Online has an article about the first bare-knuckle world heavyweight contest including the following text:
The fight went to 42 rounds and lasted nearly two and a half hours. Each round ended only when there was a knock-down, with some dragging on, blow by vicious blow, for as long as 20 minutes. Sayers, at 5ft 8in, was six inches shorter than his opponent, and stones lighter. His right arm was thought to have been broken half way through the fight, but he fought on one-handed, and managed to blind Heenan with some deadly left-handed punches. 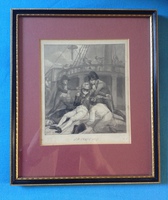 Original pen ink and watercolour wash by William Marshall Craig signed and dated 1807. This original artwork was most likely a preparatory drawing for an engraving, or book illustration.

William Marshall Craig (died 1827) was an English painter who exhibited at the Royal Academy from 1788 until 1827. Craig was drawing master to Princess Charlotte of Wales, miniature painter to the Duke and Duchess of York, and painter in watercolours to Queen Charlotte. Craig also excelled as a draughtsman, and as a book illustrator, and he published in 1821 'Lectures on Drawing, Painting, and Engraving.' 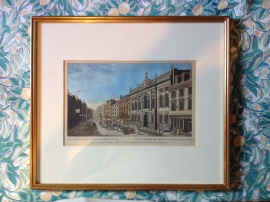 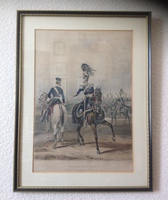 Painting by Martens presented to the Regiment by Captain Edwards

Three inch crease lower left and some mild foxing and damage in the sky.17 x 13ins (outside frame size)

Silhouette of The Rev John Maule Chaplain at the Chapel of the Royal Naval College (1773-1816). 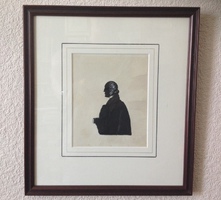 Joint author with John Cooke of "An Historical Account of the Royal Hospital for Seaman at Greenwich", published in London 1789.

John died at Abbey St. Bath [the home of his son John] and was buried at St. James, Bath. I understand there is a memorial tablet to him at Horseheath.

A View of Tonbridge From the Wells Road, Published by G Wise Circa 1810 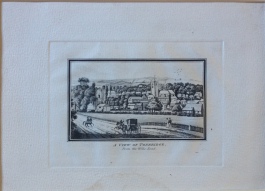 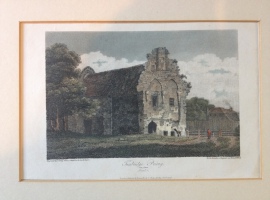 Hand coloured copper plate engraving from the Beauties of England and Wales. Published by Vernor Hood in 1806 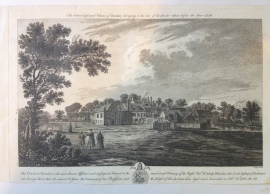 The Ancient Episcopal Palace of Bromley

Engraving from Hasted's famous History of Kent published in London 1778-99. 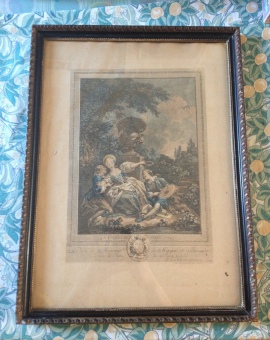 Small loss to frame moulding lower left. Back of the frame requires tidying up 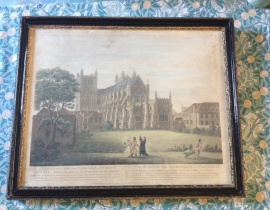 A South East View of the Cathedral Church of St Peter, Exeter

Laid on board and sold in old style Hogarth frame

Some staining and foxing 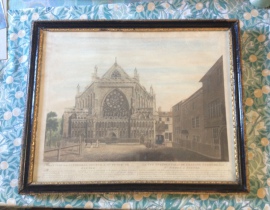 A West View of the Cathedral Church of St Peter in Exeter.

Laid on board and sold in old Hogarth style frame.

Some staining and foxing